Link to this page

Giuseppe Arcimboldo was born in Milan in 1527, the son of Biagio, a painter who did work for the office of the Fabbrica in the Duomo. Arcimboldo was commissioned to do stained glass window designs beginning in 1549, including the Stories of St. Catherine of Alexandria vitrage at the Duomo. In 1556 he worked with Giuseppe Meda on frescoes for the Cathedral of Monza. In 1558, he drew the cartoon for a large tapestry of the Dormition of the Virgin Mary, which still hangs in the Como Cathedral today.

In 1562 he became court portraitist to Ferdinand I at the Habsburg court in Vienna, and later, to Maximilian II and his son Rudolf II at the court in Prague. He was also the court decorator and costume designer. King Augustus of Saxony, who visited Vienna in 1570 and 1573, saw Arcimboldo's work and commissioned a copy of his "The Four Seasons" which incorporates his own monarchic symbols. 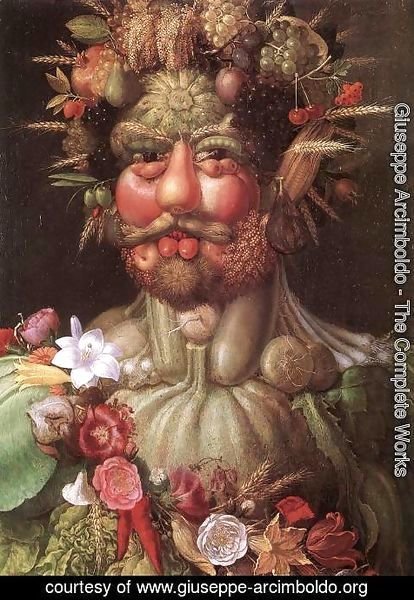 Arcimboldo's conventional work, on traditional religious subjects, has fallen into oblivion, but his portraits of human heads made up of vegetables, fruit and tree roots, were greatly admired by his contemporaries and remain a source of fascination today. Art critics debate whether these paintings were whimsical or the product of a deranged mind. A majority of scholars hold to the view, however, that given the Renaissance fascination with riddles, puzzles, and the bizarre (see, for example, the grotesque heads of Leonardo da Vinci, a fellow Milanese), Arcimboldo, far from being mentally imbalanced, catered to the taste of his times.

Arcimboldo died in Milan, to which he retired after leaving the Habsburg service. It was during this last phase of his career that he produced the composite portrait of Rudolph II, as well as his self-portrait as the Four Seasons. His Italian contemporaries honored him with poetry and manuscripts celebrating his illustrious career. His hidden-face still-lives are a possible influence on his younger Lombard contemporary Caravaggio, whose painting of fruit in the Brera museum in Milan ranks as one of the earliest independent still-lives.

When the Swedish army invaded Prague in 1648, during the Thirty Years' War, many of Arcimboldo's paintings were taken from Rudolf II's collection.

His works can be found in Vienna's Kunsthistorisches Museum and the Habsburg Schloss Ambras in Innsbruck, the Louvre in Paris, as well as numerous museums in Sweden. In Italy, his work is in Cremona, Brescia, and the Uffizi Gallery in Florence. The Wadsworth Atheneum in Hartford, Connecticut, the Denver Art Museum in Denver, Colorado, the Menil Foundation in Houston, Texas, and the Candie Museum in Guernsey also own paintings by Archimboldo. 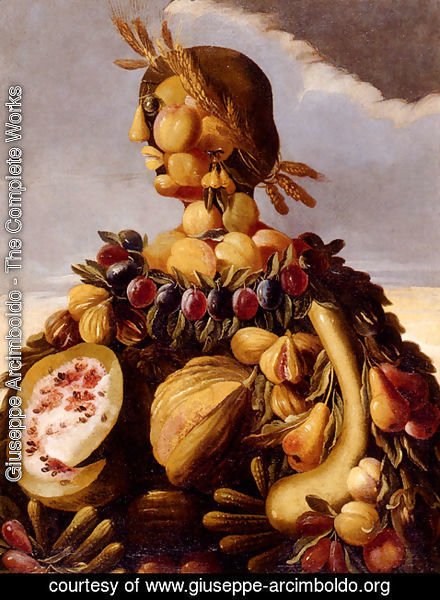 The bizarre works of Arcimboldo, especially his multiple images, were rediscovered in the early 20th century by Surrealist artists like Salvador Dali. The "The Arcimboldo Effect" exhibition at the Palazzo Grassi in Venice (1987) included numerous 'double meaning' paintings.

Arcimboldo's influence can also be seen in the work of Shigeo Fukuda, Istvan Orosz, Octavio Ocampo, and Sandro del Prete, as well as the films of Jan Svankmajer.

His painting, Water, was used as the cover of the album Masque by the progressive rock band Kansas. (From Wikipedia)

Report an error on this page